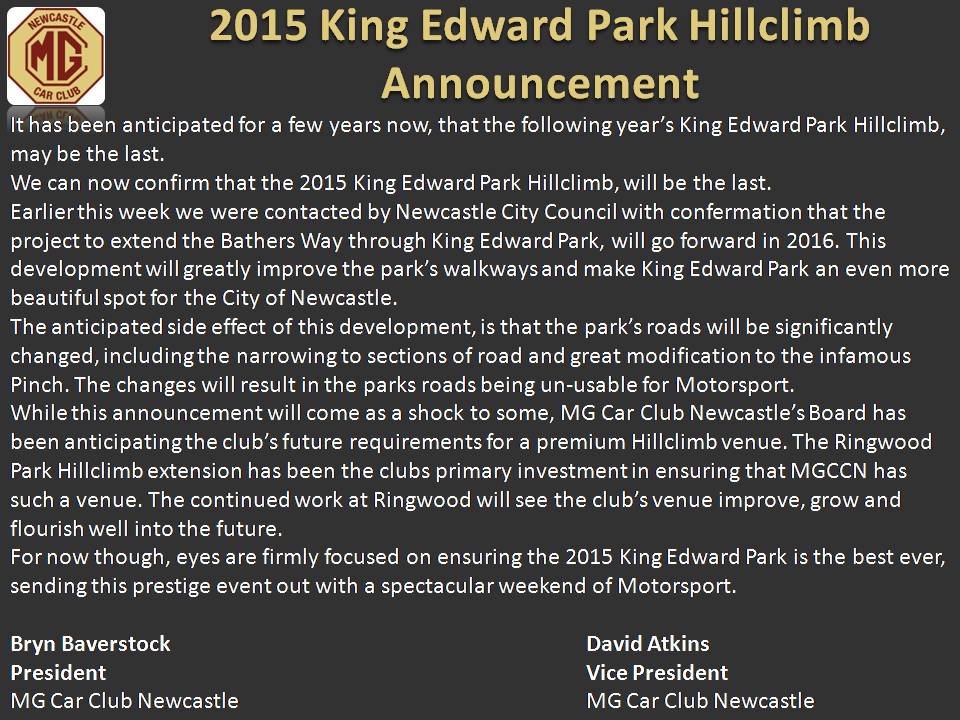 Considered one of the most challenging Hillclimb courses in Australia, Newcastle’s King Edward Park has been a picturesque Hillclimbing venue since 1951. Newcastle MG Car Club’s premier annual event, The Mattara Hillclimb, has been run on the historic King Edward Park course every October since 1963. The course record for the 1.094 kilometre hillclimb is 33.63 seconds, set by Neil Farr in his Bowen .

The event has become so popular that it is now conducted over two days – half of the 160 plus field compete in the (at the start in 1952) New South Wales Hillclimb Championship, whilst the second day’s event is a part of the Tri-Challenge series between our club and Tamworth and Kempsey Sporting Car Clubs. The outstanding success of this event, is achieved through the efforts of many dedicated people.

In 1998 the sustained organisational excellence of club members was recognised when the New South Wales Confederation of Australian Motor Sport awarded Newcastle MG Car Club the prestigious trophy for The Best Run Hillclimb of the Year. A feature of the weekend is the large car display in the adjacent parkland, usually attracting special interest classic and sports cars from other car and motorcycle clubs in the district.

This hill has history, and so do many of the cars which climb it!

Consider the unique Ron Ward-Noel Barnes MGTC Special. At the first run in King Edward Park Hillclimb in 1951 Sydney MG Importer Ron Ward drove to the top in a time of 67.72 seconds in his, then one year old, MGTC Special. We are fortunate that years later this same car still runs on the famous hill. Imported by Ron Ward as a complete rolling Ron Ward chassis (no body) in late 1949, Ron constructed the light single seater body in his own workshop. Apart from raising the compression to a very high 12 to 1, the motor was still the standard 1250cc capacity. In this form Ron raced his MGTC at Bathurst, Orange and Mt Druitt throughout 1950. The photograph to the left shows Ron talking to Clerk of Course at the start of the Jubilee King Edward Park Hillclimb in April 1951.

The car was purchased by Noel Barnes of Tamworth in late 1953, conditional on Ron Ward continuing to prepare the car for racing. In 1954 the car was painted its present Blue colour, bored to 1500cc, and supercharged to 10lbs boost. Numerous trophies and class wins followed at Lowood (QLD) and Bathurst, including 1500cc class wins at Bathurst ‘100’ meeting in 1959, 1960, and 1961 – the car won a 3 lap race at the 1961 Bathurst Easter Meeting, being timed on Conrod Straight at 128 mph. Although not used in competition since 1962 Noel Barnes retained the car and following a light restoration it was driven by his son Eric at the April ’99 New England Historic GP in Uralla NSW. Today the car is driven by Noel’s sons, Eric and Ian Barnes. Noel, now in his eighties, attends every meeting.

Other competitors in those days included Dick Cobden, John Crouch, Ron Taurenac
and Sir Jack Brabham. Sir Jack was quoted as saying King Edward Park was the most demanding and best set up hillclimb in all of Australia.

Hillclimb course is justly famous and Newcastle MG Car Club are fortunate to have such a beautiful and challenging circuit in our home town.